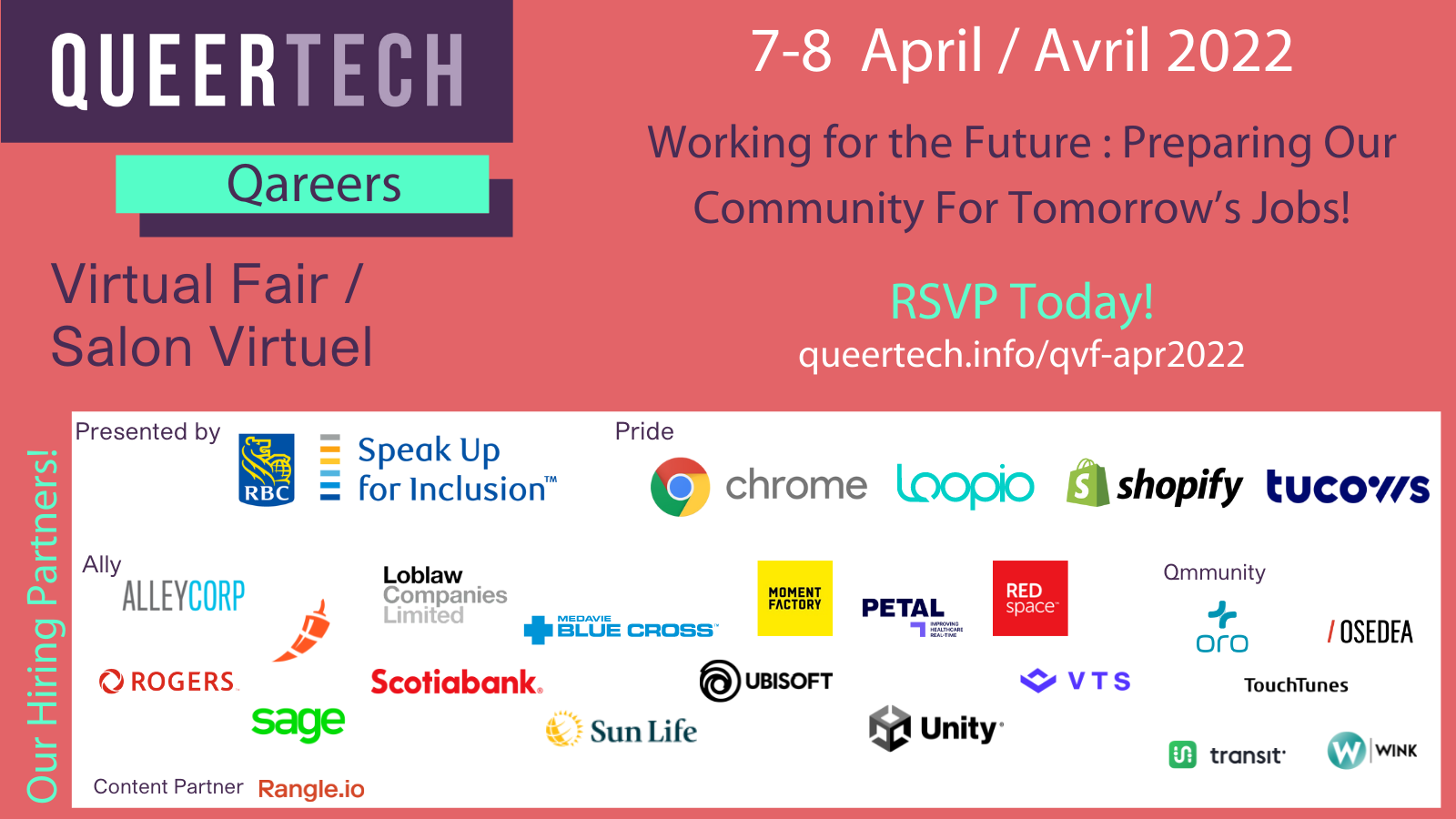 ATTENDING THE QAREERS VIRTUAL FAIR? THIS BLOG POST IS FOR YOU!

We are excited to have you join us at the QueerTech Qareers Virtual Fair! We highly recommend that you take a look at all of these event logistics, tips and tools to help your prepare and make the most of your experience.

We can't wait to help you find your newest opportunity as we work to QUEER THE TECH ECOSYSTEM!

CHECK OUT WHO'S HIRING?

Take a moment and check out all of these hiring partners. Click on the link to their website, or check them out on the QT Talent Network. You can also sign right into Brella and find all of the HIRING COMPANIES Virtual Booths.

CHECK OUT THESE PARTNERS ON THE QT TALENT NETWORK!

Montréal, March 16th, 2022 - Collaboration is a critical component of increasing the impact of QueerTech’s successful events and expanding their ongoing support for the 2SLGBTQ+ community within STEM. This is why QueerTech is excited to announce that they have partnered with EngiQueers (EQ) Canada, a national non-profit organization that represents over 30 engineering member groups at universities across Canada. EngiQueer Canada's three main focuses are professional development, education and advocacy and education, and building social connections. To achieve these goals, EQ Canada provides equity, diversity and allyship training at all the Canada-wide Engineering Conferences as well as to all our partners. We also host fundraisers to support Queer Initiatives and host networking events throughout the year for students to connect with industry members.

Montreal, February 10th 2022 - Last year was an incredible year of growth for QueerTech and with a new year, comes new opportunities. It is our mission to empower our members to achieve their personal and professional goals by bringing their authentic selves wherever they go, striving to encourage a sense of belonging that comes from both giving and contributing to our communities. We believe in education, in reciprocity, and that everyone has something to teach and learn. By combining all of these factors, we are building strong communities to help Queer people thrive.

“Part of Our DNA”: How RBC Fosters Diversity in Its Teams

Looking for a job where you feel safe and secure being yourself can often feel like a daunting task – how do you really know if an employer really comes as advertised? Luckily we’re living in a time when many industries are making diversity and inclusion at work a top priority. Here at QueerTech, we’ve partnered with a variety of companies that have set shining examples with their commitment to making workplaces a safe place for Queer people. One company that’s working hard to blaze the way as a leader in diversity is RBC.

How to Make the Most of your Qareers Virtual Fair Experience!

QueerTech’s mission to queer the tech ecosystem is driven not only by a desire to have greater representation in the tech industry but also to ensure that the jobs queer people are finding will be safe and secure no matter how we identify. As a part of this mission, we can’t wait to host the Qareers Virtual Job Fair, a fantastic opportunity for you to meet with employers that we trust to be committed to fostering safe and inclusive work environments.

To make sure you get the most out of your Qareers experience, we’ve written up a short guide to help you navigate the virtual platform we’re using and to give you a sneak peek at the employers who will be there.

Get familiar with Brella.io

Two-Spirit in Tech: Reclaiming the Past and Securing the Future

Jarret Leaman (he/him) has dedicated a lot of time and effort to find not only professional success but also happiness for himself and his community. He’s worked hard to attain a Bachelor of Business Administration with a minor in Indigenous Studies from Trent University, a Master’s degree in Industrial Relations through the School of Policy Studies at Queen’s University, and he’s also won awards for his work with the 2SLGBTQ+ Indigenous community.

He received The Sovereign’s Medal for Volunteers from the Governor-General, on behalf of Queen Elizabeth II, and he was named one of Huffington Post’s Top 3 Indigenous Millenials in Canada. These impressive accomplishments didn’t come easy to Jarret though – like all of us, he had a unique journey to proudly claim his identity.

“We're always looking to build our community and safe places for people who are like us,” says Justin Finnegan, the leader in charge of Wealthsimple’s 2SLGBTQ+ Employee Resource Group (ERG), known as Rainbow. Finnegan and his team are devoted to helping the employees of Wealthsimple “find their people” – something crucial to easing the stress of coming into a new workplace. Rainbow’s efforts have grown considerably over the past few years; proof of how important the group has become.

Back in 2018, when Rainbow was founded, it consisted mostly of allies. At first, it was hard for the group to find a purpose, which resulted in an unfortunate lack of community. After Wealthsimple employees shifted to mostly remote work due to the COVID-19 pandemic, Rainbow took on a new level of purpose and began to really take off with the help of communication tools like Slack.

Taylor Bond is an entrepreneur, queer leader, and community organizer who wants to make sure more people in our community are able to achieve success within the tech industry. After studying political science at the University of Toronto, he worked in sales for a number of different tech companies, created his own tech startup, and was able to negotiate his company’s acquisition by a larger firm. Outside of his professional life, Taylor’s identity and confidence were really formed during his time as a young competitive swimmer and queer community organizer.

Although it’s indisputable that Taylor has been successful in his endeavours in tech, he maintains a level of humility about it all. He has worked hard to achieve his goals, but he also acknowledges that he was afforded a number of privileges that helped him along the way. The ability to work day and night, where others might have families or other obligations that take up their free time, is one such privilege he recognizes in his life. He says that his luck goes back even further than that, to his childhood as a "third-culture" kid – someone who spends their formative years in places that are not their parents’ homeland.

Never Too Late: Changing Your Profession To Change Your Life

Laura B. MacDonald is currently the Director of Finance & Accounting at Local Logic, living what she says is a life she never imagined for herself, but for which she is deeply grateful.

After pursuing an education in the arts, including a Masters of Art History from the University of British Columbia, Laura embarked on a mission to become an “art star”. In pursuit of her dream, Laura worked various full and part-time contract jobs to fund her personal performance art practice. Her income was often erratic and unreliable for many years. Eventually, this life started to wear Laura down, and she realized she needed to make a change in order to provide herself with a better life.

Laura set the intention of starting over from scratch. She went through a systematic decision-making process she says was immensely helpful for making such a tough choice. She made two lists, one described everything she wanted in a job and the other was an inventory of all of her skills and strengths.

Having struggled with job insecurity as an artist and activist, Laura knew that she wanted to never face unemployment again, so her first list included things like “part of a professional order” and “something every organization needs”. The list of things she was good at included being organized, negotiating, and managing money. With these lists in mind, Laura spent time researching online, and finally decided on a new life as an accountant.

It wasn’t easy for Laura to get back into the learning groove. She didn’t have many resources to rely on when she enrolled in the undergraduate commerce program at Concordia but what she did have was lots of hard-learned punk wisdom. Translation? She knew how to make something out of almost nothing.

Laura used the Lifelong Learning Plan (LLP) to borrow interest-free from some small RRSPs she had saved, waited tables part-time at a worker’s coop restaurant and then applied for a small amount of student loans to make up the gap. But within 6 months she was able to impress one of her professors with stories of her experience teaching in anarchist free-schools, landing herself a position as a teaching assistant.

Meanwhile Laura feverishly researched and applied for scholarships, more than thirty within her first year. This process of hunting for scholarships is usually overlooked by students but Laura’s experience shows that it is worth the effort. Laura received a $20,000 scholarship, later discovering that she was one of only ten applicants, and that some scholarships aren’t even handed out in certain years because nobody applies for them at all.

Near the end of her undergrad, Laura was offered a job with the Montreal office  of PricewaterhouseCoopers (PwC), one of the most prestigious public accounting firms in the world. It was a huge opportunity – only 50 candidates were chosen out of more than 1000 applicants that year. The competition amongst her classmates had been fierce and the opportunity was so prized that Laura was willing to try to fit in with the generally conservative culture of being an auditor at a “Big Four” firm.